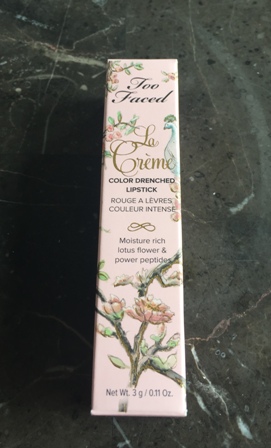 I’ve used a ton of Too Faced products over the year but other than my beloved Melted Liquid Lipstick, I’ve never used their lipsticks. Even though they just launched La Matte Lipstick (and trust me, I’ll definitely get around to those), I was way more interested in the new La Crème shades. We’ve been using so much matte lipstick lately that I’ve almost forgotten what creme lipstick feels like. And with names like Unicorn Tears, I was sold. We got to try eight of the new shades (we’re missing Topless and Sugar Daddy) and one of the originals, Pink Chocolate. 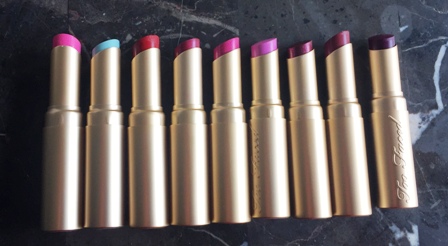 These lipsticks go on ridiculously smooth. They’re soft enough to be able to maneuver but hard enough that they don’t end up all over the place. Because they’re not matte, they’re also not transfer-proof and you really have to reapply pretty often. The upside is, they’re really comfortable and moisturizing and feel fantastic.

The shades are also incredible. I had to try Unicorn Tears first because I was so intrigued. It’s an iridescent shimmer that you can wear on it’s on or over another lipstick and it’s insanely gorgeous. Pink Chocolate might be the oldest shade in the bunch but it’s one of those shades that’ll look great on anyone. WHAM!, however, is my favourite. Too Faced calls it an iridescent raspberry and that’s a decent enough description but it’s really so much more than that. It’s the perfect red for a night out when you want something different. The shimmer just makes it something special.

I might have favourite shades but they’re really all stunning and there’s something for everyone with over twenty colours to pick from. I might have a hard time deciding between the shades and the names, but I’m sure I’m not the only one.