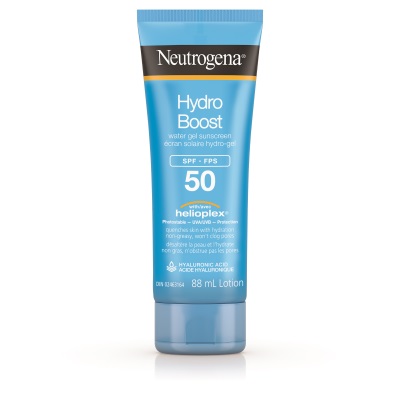 I’ve been a massive fan of Neutrogena’s Hydro Boost line since it was released a few years ago and Neutrogena is also generally my go to brand for drugstore sunscreen, so when I heard there was a Hydro Boost sunscreen coming I was all over it. I’m extremely fair, burn easily and have already dealt with melanoma once, so sunscreen is a pretty important part of my life. I have at least one in my purse at all times and slather it on before I leave the house, even if I’m just driving around the corner. I have a few requirements for a sunscreen to make it into my routine.

It obviously has to work, it can’t leave a white cast behind (I’m pale enough on my own), it can’t have a funky smell and it can’t leave my skin dried out. This Hydro Boost sunscreen checks every box and then some! We have a number of sun care posts coming up but this sunscreen blew me away so much that it had to get it’s own post.It’s not a physical sunscreen, so there isn’t any zinc goop leaving a film and while I don’t really love chemical sunscreens, this one works ridiculously well.It has the same light, fresh scent as the Hydro Boost Moisturizer and it’s fairly runny and absorbs instantly. But it also has Hyaluronic Acid and leaves my skin on my face and body super moisturized and I love that I can use it on both and not break out. I’ve used it in the car and walking around outdoors and I have to say, this is my favourite new sunscreen in a long long time.

It’s a couple dollars more than a typical drugstore sunscreen (at least when I’ve seen it in stores) and at 88mL, it’s not a big tube but results will have me replacing this every time I run out.